The last of the sheep lambed a few weeks ago now.  The last sheep that lambed was a hogg (one of last years lambs, who will be shearling after being sheared in June/July!).  Unfortunately it was having twins and we were unable to lamb it ourselves and ending up taking it to the vets in Settle one Saturday night just before midnight!.  One lamb was coming breach and the other lamb had its head down pushing against the sheeps pelvis, and mum nor dad could not draw its head up as the lamb coming breach had oneleg and bottom in the way and neither could come out, they were both well and truly mixed up!  Even the vet struggled!  Both sheep and lambs are doing really well now.

I have now got 10 pet lambs, the older ones are just about weaned from the milk, however two younger ones, Majorie and Vladimir are still being bottled fed as they are quite young.

The contractor sprayed the fields with liquid fertiliser a few weeks ago; so the warm weather the other week has helped the grass to grow.   The main sheep have now finished being fed provin on a morning and just eating the new grass.  The lambs with them have access to small pellets of provin in a 'creep' feeder (the older sheep can't get their heads in it).

At Young Farmers we have recently done First Aid, Stock Judging and a tour of Kirkby Lonsdale Brewery.  Over the Bank Holiday James along with most of the older Young Farmers from our club go to Blackpool for the Young Farmers , three day AGM,   There are around 6000 Young Farmers going from all over the country.

One of the hoggs with a Texel X lamb 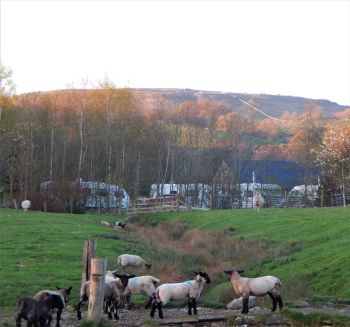 Some of the older Suffolk X lambs 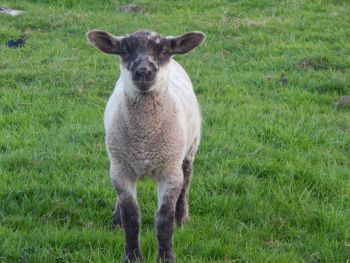