Finally we got the pigs outside! We transported them in the trailer, three pigs decided to get in the trailer following a bucket with food in, the other three were stubborn and decided they would rather stay where they were.  We decided to take three first and come back for the others.....pigs don't like to rushed, bossed around or moved to unfamilar places!   One particular pig sulked and refused to move, the other two followed their noses into the trailer.  We tried using a pig board to 'stear' her into the trailer but she kept squealing and running back, so we covered the hurdles around the trailer sides with sheets so she couldnt see outside and we hid behind the sheets, waiting and waiting until her desire for the food that was in the trailer got too much for her!  She eventually walked calmly in, we hastily shut the gates around her and drove up the field.   They now live outside and have a  little shed to shelter and sleep in ('pig palace') and have been enjoying the sunshine and freshair. 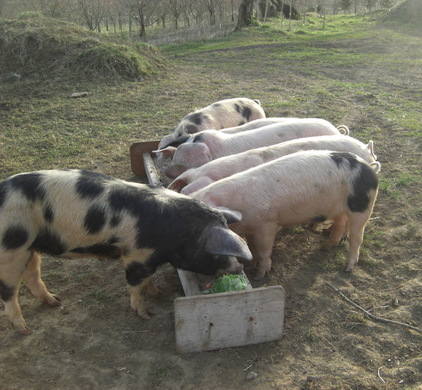